Ultimate Summer Sundresses: Even When I Use Modern Vogue Patterns, I Look Vintage

This project is covering a lot of ground for me. It’s my submission to the Sundress Sewalong hosted by Heather and I’m planning to write up a quick post for The Monthly Stitch, since the August theme is all about the number two. Gingham was supposed to be on-trend this summer. Did it actually turn out to be worn by people? I remember seeing it in various fashion forecasts, but then didn’t really notice anyone wearing it around town. No matter. Trendy or not, I really like gingham. A few years ago, I stumbled upon an online retailer selling a nice dress-weight 100% cotton 1″ gingham in several colors. Usually when I’m looking for gingham all I see are the thin poly-cotton blends, so when I found the good stuff, I made sure to buy some of each color. I’d used some of the pink and some of the orange, but I had 5 yards of blue still sitting in my stash uncut. Blue gingham, of course, is the trickiest to wear of all the gingham. It seems to be the default color both for “I want to look like a movie costume” and “I want to look like a down-home country girl”. There’s just no way to avoid one or the other of these associations, so I didn’t even try. I paired the gingham with a white cotton eyelet, we put on our red shoes, and my sister took pictures while we posed with old farm equipment. 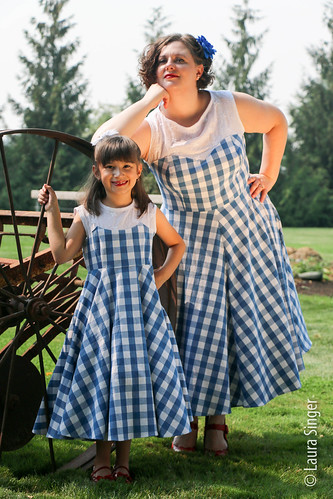 And posed with new farm equipment. 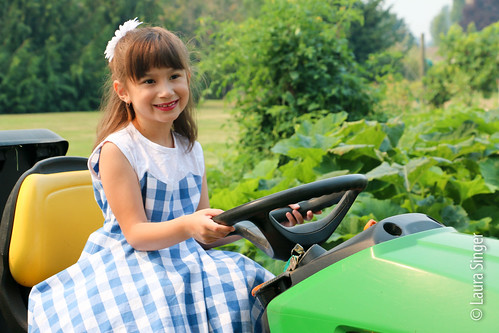 These dresses were made for twirling 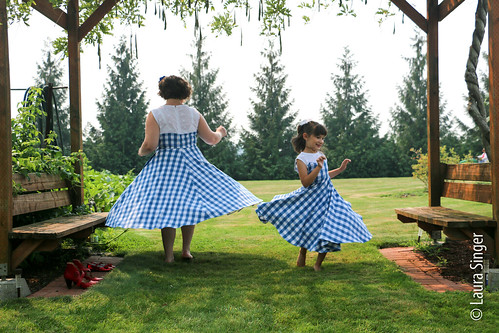 And for lounging around barefoot. 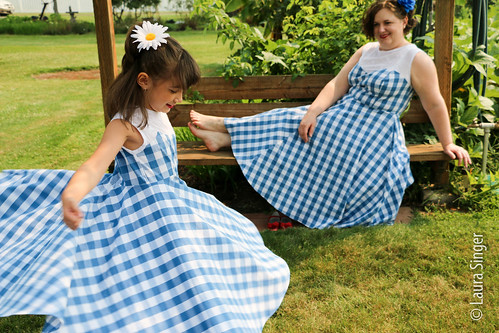 The creative process for this set of dresses was particularly fun for me because I mashed up so many different patterns and features to get the look I was after. I’m usually make things pretty close to the envelope, or make only minor changes, so I enjoyed picking out only certain features that I wanted to have in these dresses and the challenge of putting them together in a way they weren’t necessarily intended to be assembled. They aren’t exactly the same, but they are close enough to be very matchy-matchy. 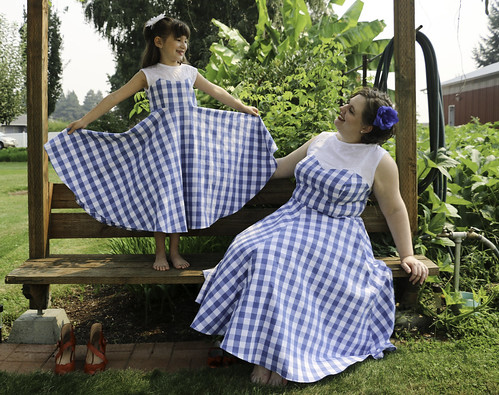 Guinevere’s dress is based on a vintage pattern, McCall’s 8707. I skipped the sleeves and collar and drafted a full circle skirt to replace the gathered one included in the pattern. Then I also skipped the ties and put a zipper in the back instead of buttons. I used lapped seams to attach the bodice to yoke in the front. The neckline and armscye edges are finished w/ self-made bias binding using the same fabric as the yoke. As it turns out, sewing on bias binding made of eyelet is quite a pain; there’s so many lumpy spots. Since I was using bias binding, I didn’t have to worry about adjustments to the neckline or underarm area interfering with facings, so as I got the dress put together, I had her try it on, found a spot where the neckline felt good for her and cut it down to there. Then I cinched up the side seams a bit to compensate both for her being such a slender girl and for not putting the sleeves on as the pattern was originally drafted. She still has some growing room; hopefully this will still fit her next summer. I kind of feel bad for this pattern, having picked over and used so little of it. Maybe I should plan to make her another dress from that pattern, using the rest of it as it was originally designed. 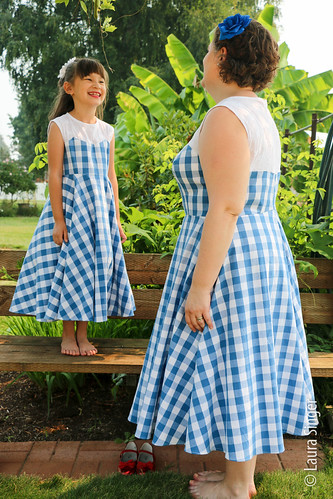 I used a mix of two different current Vogue patterns for my dress. The bodice is Vogue 8849. I was mixing up patterns anyway, so I went rogue on making it up and didn’t read the instructions. I really should at least look at the instructions so I can write a decent review of them later, but I really wanted to focus on the sewing for this one. I lapped the bodice/yoke joining seam. The neckline and armscye are bound with eyelet bias, just like the smaller dress. One of the reasons I chose this pattern was the ability to easily do the contrast yoke, but the other reason was the sizing. This is one of those multi-cup sized patterns, so I didn’t have to mess with an FBA. I did have to shorten the bodice around the waist area nearly 2 inches because I’m short, but that’s a much easier adjustment than an FBA. I originally blended up a size between bust and waist, but ended up taking out the extra waist ease as I tried on while sewing. You will notice that in pictures where I’m moving around, the dress sometimes does look “big” across the front above the bust, but I think that’s just what movement does in a woven fabric, especially in an area that is so affected by where my arms are. When I’m standing up with my arms neutral, everything feels comfortable but doesn’t seem to have too much fabric.

The skirt is the one from Vogue 8615. It’s full and twirly and it has pockets. I wear it with a crinoline underneath to give it some structure, but it doesn’t necessarily need to have one. The skirts are finished off with machine-stitched narrow hems. I didn’t put lining into any part of either of these dresses, so all the seams are serged. Both have invisible zippers in back, which seemed like the closure least likely to have me end up with yoke/bodice joins not meeting across the horizontal. For the most part, things seem to have lined up ok.

After all that twirling, it was nice to have this little break  and lie down, even if I felt like I should be reciting poetry while floating downstream like Anne of Green Gables. We told each other knock-knock jokes while we laid there–our photographer was very patient with us. 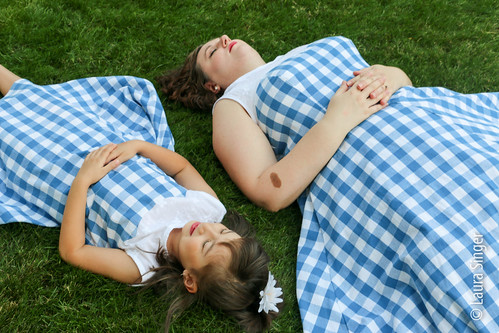 This was a stash-busting project. I can’t believe I’ve let this fabric sit around for so long waiting to be worn.

Photo Credits: Laura Singer
Special thanks to my parents for letting us take pictures at their house. You can tell they’ve put a lot of work into their yard and garden.